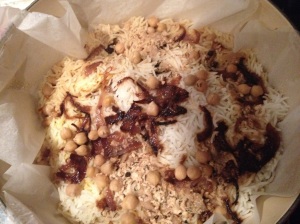 The different colours and textures

We were missing white rice and so this dish came to mind. I wanted something with flavour but without heat and at the same time giving all the comfort of rice. This hit the spot perfectly. There is a bit of faff involved in layering the rice but to be honest its hardly time consuming. This is a great dish if you have people round and want something to wow them with. We served ours pretty much as is. It was perfect.

I have to say was quite skeptical the first time I made this dish namely because of the absence of heat, as well as the total lack of garlic and ginger but I have to say with a couple of tweaks I really do love this dish. While traditonal biryanis are very firey this one is quite delicate the vast quantities of yoghurt in this make the end result very creamy in texture all the while still enabling the biryani to pass the biryani test; individual grains of rice are visible at the end. The fact that this made with black spices gives the dish an almost plau/pilau like taste but in my mind this was a lot lighter.

I was able to cook the lamb during the day and prepare the rest pretty much afterwards. If I had thought about it a bit more I would have cooked the lamb and frozen it pre Ramadan for a speedier end result. I’ll definitely do it that way round the next time I do this. We bought a ‘Wonderbag’ last year and I have to say it is perfect for doing the whole ‘dum pukt’ (steam cooked) thing. If you don’t have one I explain what to do.

1. Wash the rice and leave to soak.

2. Chop the onions and fry half of them in enough oil so that they are nearly covered. Add in a pinch of salt to help the onions release their water and become golden brown.

3. Take the onions out of the pan when they are golden brown and drain on kitchen paper.

4. Remove the excess oil from the pan, until you have enough just to coat the base of the pan then add in the remainder of the onions and fry until they are soft.

5. Place the meat in the pan and add all the dry spices excluding the sea salt and brown the meat allowing the spices to heat but not burn.

8. Add the yoghurt and add half a teaspoon of salt.

9. Place the saffron in a small bowl and pour on half a cup of hot water and allow to infuse.

10. An hour an half before iftari boil the rice in water until it become translucent. Then drain the water from the rice and rinse a couple of times in cold water to stop the rice from cooking.

11. In a pan, large enough to accomodate everything, line the pan with baking parchement.

12. Now begins the ‘biryani’ building. Start making layers of meat, rice, yoghurt sauce, chickpeas, the fried onions and then a drizzle of the saffron water. It should make a minimum of two layers.

13. If you are cooking this without a wonderbag, put a tea towel on top of the pan and then put the lid firmly on top, bringing the sides of the towel up on to the lid so that they do no dangle near the heat source. Then put the heat to high for 5 mins before bringing to low and leaving on a low heat for about 30 mins. Do not open the lid during this time.

14. If you are using a wonderbag put a lid on the pan then place on a medium heat for about 10 minutes before placing in the wonderbag for about an hour.

15. To serve either invert on to a serving platter or serve trying to maintain the sections.